Trustee since 2020, Faculty at University of the Arts 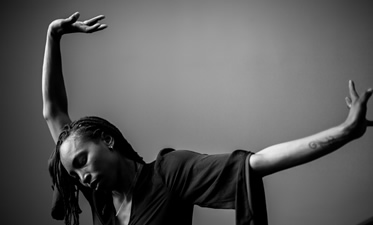 Shayla-Vie Jenkins is a performer, teacher, and maker whose current research and practice explores blackness, presence, and liberation. She is an Assistant Professor in the School of Dance at the University of the Arts in Philadelphia. She received her BFA from the Fordham/Ailey program and an M.F.A. in Choreography and Performance from Smith College. Shayla-Vie performed with the Bill T. Jones/Arnie Zane Company from 2005–2016. During her tenure, the company received two ensemble New York Dance and Performance Awards for Chapel Chapter (2007) at Harlem Stage and for the “Outstanding Revival” of D-Man In The Waters (2013) at The Joyce Theater. She has restaged notable BTJAZ works at universities nationwide and continues to teach for the company at the American Dance Festival. In 2019, Shayla-Vie performed in the Merce Cunningham Centennial Celebration’s Night of 100 Solos: A Centennial Event at the Brooklyn Academy of Music. She has recently performed in projectswith Rebecca Lazier, Susan Marshall, Yara Travieso, Ni'Ja Whitson, Okwui Okpokwasili and Peter Born’s (Sitting on a Man’s Head), and Yvonne Rainer’s (Part of Some Sextets). Shayla-Vie can currently be seen in two virtual performances for the 2020 Philadelphia Fringe Festival: David Gordon’s The Philadelphia Matter 1972/2020 and James Allister Sprang’s Aquifer of the Ducts.

Shayla is currently an Assistant Professor of Dance at the University of the Arts in Philadelphia.